Do you ever feel like you need to use some of your older scrapbook supplies instead of buying new stuff?  Here is a card you can easily make using the older stuff you might still be hanging on to.  Any card stock will work and I also used some left over polka dot velum.  Dust off your Quikutz Squeeze hand tool and dies to make the ice cream shapes.  The word "summer" is a Quikutz rub-on and  "fun" is made with the old Summer set of  Making Memories  foam stamps. 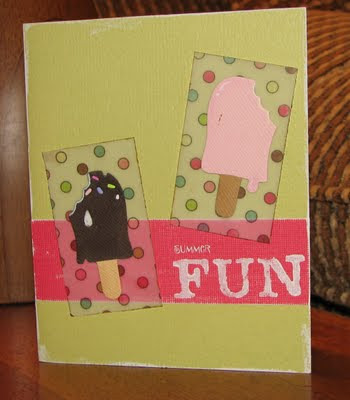 We are back from our Walt Disney World  vacation and we really had a great time.  This time while we were in the Magic Kingdom, we decided to hunt for the hidden paint brushes on Tom Sawyer Island.  If you haven't heard about the paint brushes, you aren't the only one. When in the Magic Kingdom, many people overlook taking the raft to Tom Sawyer Island....and some people go to the island without knowing that paintbrushes are hidden daily by Disney cast members. If you and your party find one of these paintbrushes, you can return it to a Disney employee in exchange for a Fastpass for your entire group. Only one paint brush per family. The first time we tried, we came back empty handed.  The second time we went earlier to catch the first raft to the island and we found a paint brush!  (The island doesn't open until 10:00am.)  Our raft driver said there start out with about 8 paint brushes and rehide some when the are found, but the best way to find them is to come early.


We found our brush hidden in this bush.  We saw it because of the white paint. 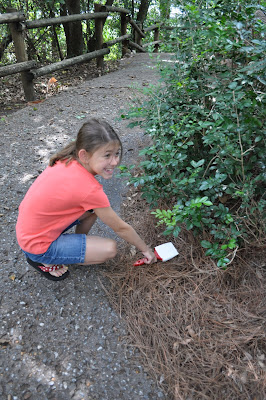 Here we both are with the brush. 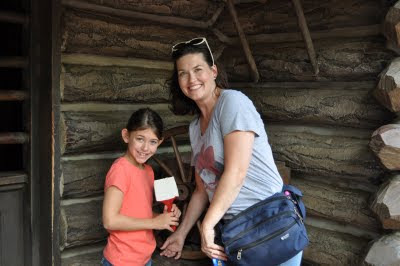 I have seen pictures of brushes that other people found and they had instructions printed on the brush.  We didn't have anything printed on our brush and neither did anyone else that we saw finding them that day. 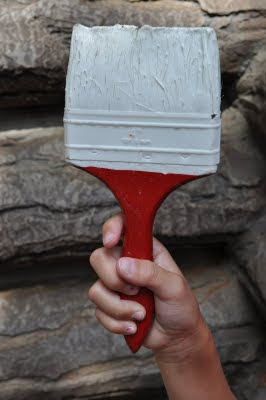 My daughter trading the paint brush for fast passes. 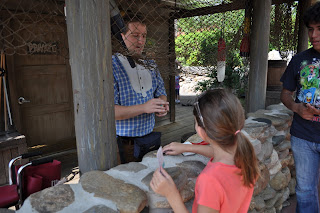 We got fast passes for Thunder Mountain and Splash Mountain.  My husband and son missed out because they were over at Animal Kingdom, but they would have gotten them too if they had been with us. 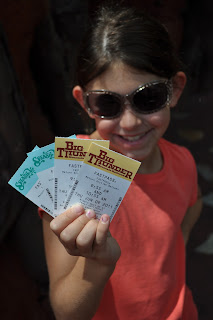 I'm packing for our Walt Disney World vacation.  I am so excited!!  In honor of our upcoming trip, I thought I would share some Disney scrapbook LO's.
Small World is an 8x8 LO, but the other 2 are 12x12. A friend of mine has a son that was in a bad motorcycle wreck.  He has had some major damage to his legs and will be in a wheel chair while he recovers.  She was looking for something to hang on his chair so he could have a water bottle and other items near him.  I found this Simplicity pattern (#2822) and this is how it turned out.  I will say for a Simplicity pattern, there were a couple of things they could have made a bit more clear, but I figured it out in the end.  They also made the straps very long so they could be tied into a cute bow.  Since this is for a guy, I made them shorter for a knot instead of the bow....a little less girly. 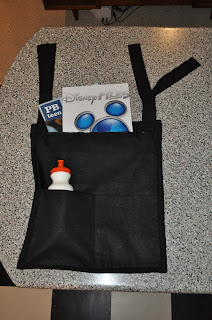 Posted by Unknown at 7:35 AM No comments: